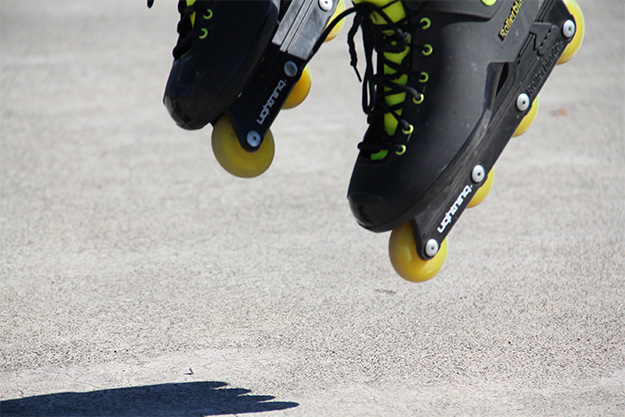 One of the first decisions new skaters need to make is which type of skates to choose. You’ll find a wide variety of styles designed for different purposes. Upon visiting your local sports shop you may feel overwhelmed with all the choices, and it can be difficult to figure out which skates are the right ones for you. New skaters may want to know the difference between inline and quad skates. The type of skates that are best for you depends heavily on how you intend to use them.

Design Differences
Quad skates, also known as four-wheelers, have a stable design. They feature skate shoes or boots that are similar to those found on ice skates and have two wheels in front and two in back. This design lends itself to better maneuverability and provides stability for skaters that are at a beginner skill level and learning to balance. On the other hand, inline skates feature sport boots made of hard plastic along with straps for ankle support, and they have wheels that are arranged in a single line. This design makes for good performance.

Wheel Comparison
The wheels on quad skates are wider, thus giving them more surface area, which benefits stability for turns and other movement. However, the wheels are smaller than those on inline skates and, coupled with the width, this makes it more difficult to gain and maintain speed, compared with inlines. Although some quad skates are designed for speed skating, in general, quad skates are slower than inline skates. On the upside, quads skates have softer wheels that offer more grip.

Differences in Use
Because the wheels on quad skates are smaller and more agile in their movements, they’re best used for dance skating, roller derby and roller disco. However, the wider surface area of the wheels makes it more difficult to skate outdoors. For this reason, quad skates are better suited for indoor skating. You can use inline skates both indoor and outdoor, whether it be for recreation, sport or fitness. Because the wheels on inline skates have less grip, it may take some time to learn to skate indoors on inline skates.

Difference in Braking
The other major difference between quad skates and inline skates is braking. Quad skates have a brake on the front and inline skates have a brake on the back. This means you stop by pushing the toe of your boot down for quads and for inline skates you stop by pushing your foot forward and pressing your heel down. For beginners, it’s often tricky to learn toe-braking, compared with heel-braking. So while quads are beginner friendly, keep in mind that it may take some time to get the hang of stopping with a toe brake.

The original article from: www.ehow.com

How many calories are burned rollerskating?

How to change in-line skate wheels?

The best roller skates for exercise.

Is rollerskating a good cardio exercise?